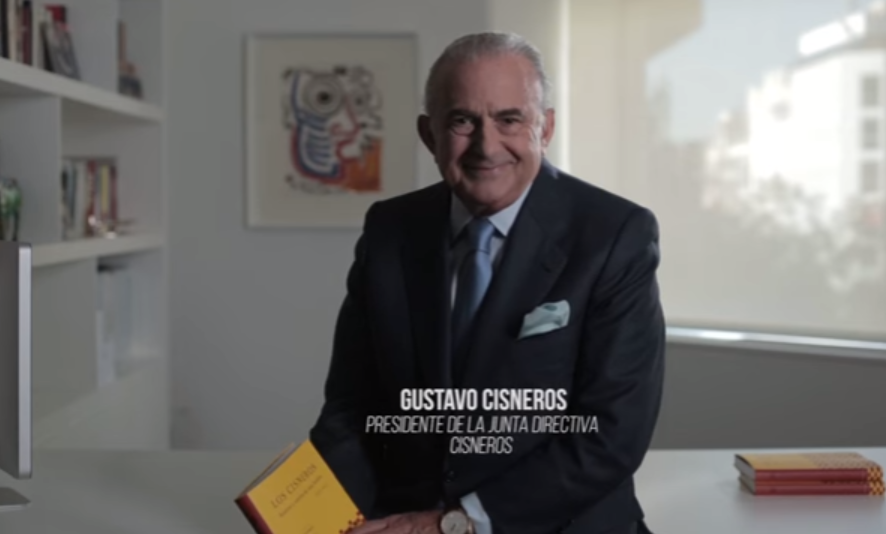 I am very excited to share with you that on October 16th, one of my biggest life dreams was crystallized when I launched, “The Cisneros: Faces and Footprints of a Family (1570-2015)”.

The Royal Spanish Academy of History in Madrid was where, alongside my wife Patty, my son Guillermo and dear friends such as José María Aznar, Ana Botella and Bieito Rubido, I culminated a project of more than three decades of research about the origin of our family.

“The Cisneros: Faces and Footprints of a Family (1570-2015)” draws on the roots of the Jiménez de Cisneros family during its beginnings in Palencia, Spain; a place they were forced to abandon due to circumstances. Following a brief stay in La Habana, Cumaná and two decades in the Port of Spain, they finally established themselves in Caracas.

In 1982, two years following the death of my father (Diego Cisneros) I began this adventure inspired by him, who during his moments of reflection asked my mother Albertina and me to recover the family history for posterity.

Written by José Ángel Rodríguez, this book pays homage to the memory of my father. It would not have been possible without the collaboration of brilliant historians and archivists such as Antonio Herrera-Vaillant, Juan Torres Fontes, Manuel Amador González and Álvaro García Castro; not to mention Ms. Carmen Iglesias and Julio Ortega who contributed the prologue and epilogue. I thank them all deeply for the dedication and love they have put into this project.

Similarly, I would like to give special thanks to Mr. Javier Garciadiego, who accompanied me throughout the presentation of this project to Brown University and Ms. Enriqueta Vila Vilar, who honored me with her presence on that occasion.

Although this book began as an investigation into the origins of the Jiménez de Cisneros family, the result portrays an extensive mutual history which embraces us from across the Atlantic to the Pacific, and is told in our shared language. This is why I hope this book will inspire not only the descendents of the Jiménez Cisneros family to learn about and deepen their roots, but also all those families whose histories form part of the Ibero-American fabric which has been woven together to create our shared history.